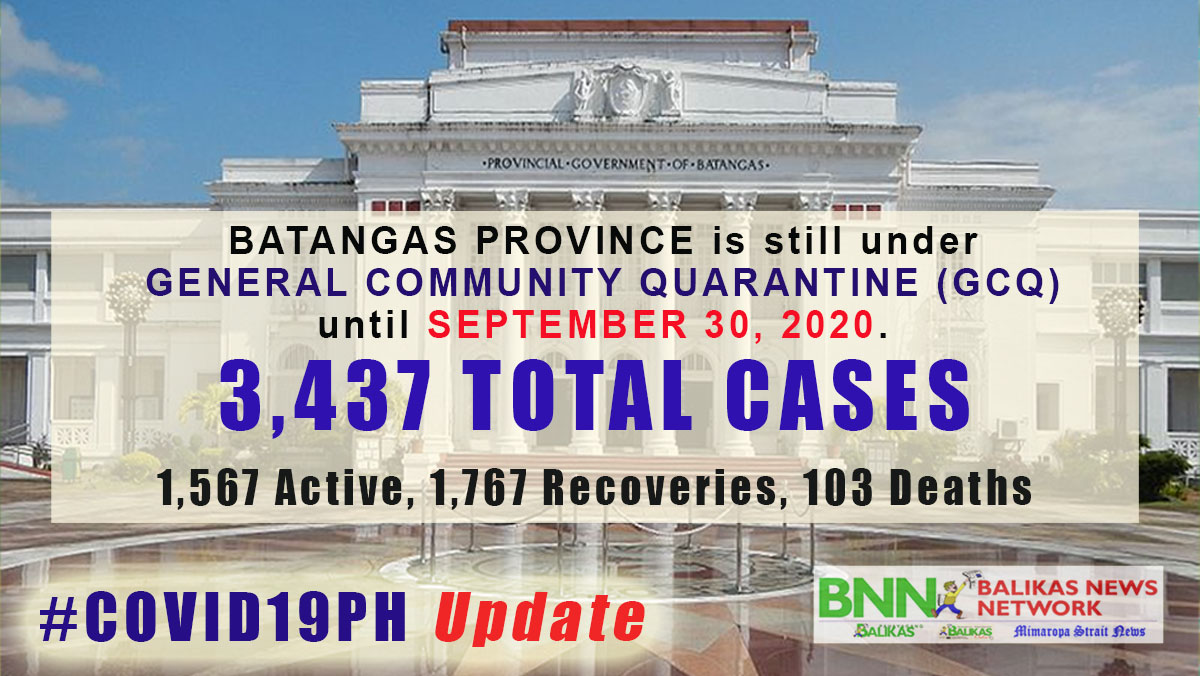 In extended GCQ until Sept. 30

ECONOMY takes its toll as companies try to start recovering and open shops since the Inter-Agency Task Force on the management of Emerging Infectious Diseases (IATF-EID) relaxed the community quarantine level of Batangas province and placed under the modified general community quarantine (MGCQ) on July 1.

But this action also opens some industries to an abrupt surge of corona virus disease cases when workers flocked to their workplaces. [See related story.. http://www.balikas.net/covid-19-cases-in-batangas-surge-as-economy-reopens/ ]

With the looming number of cases in the National Capital Region and the Calabarzon, the Philippine Medical Society and more health frontliners petitioned the government for a timeout. Responding to their appeal and upon the endorsement of the IATF-EID, President Rodrigo Roa Duterte, reverted the quarantine status of Metro Manila and adjoining provinces under modified enhanced community quarantine (MECQ) effective August 4 to 18. The provinces of Bulacan, Cavite, Laguna and Rizal were reverted back to MECQ leaving Batangas with 1,119 cases under the GCQ level. On August 18, those places under MECQ were relaxed to GCQ until August 31; with Batangas extending the GCQ status until Aug. 31.

Meanwhile, the influx of workers carrying the virus in their workplaces undeniably gave a big blow to frontliners managing covid-related cases in different towns and cities of the province. Inadequate preparations or lack of it among different establishments translate the relaxed movement of workers into surge of positive cases. This caused the city government of Batangas to suspect and ordered the institutional lockdown of the JG Summit expansion project in Simlong, Batangas City.

In Calaca town, no less than 50 positive cases were recorded among the workers from Simlong who went back home due to the institutional lockdown. In San Pascual town, more than 400 workers and their kins were monitored and tested while Bauan municipal government ordered the temporary closure of a facility for non-observance of the minimum health stanrds causing noticeable filing up of cases.

In the City of Lipa, some companies inside the Lima Technological park were also ordered temporary closure together with a business process outsourcing (BPO) for the influx of cases among workers.

For the whole month of August, the confirmed positive cases of CovId-19 in Batangas has tripled. The 1,119 cases recorded on July 31 has incredibly increased by 207.15% to as high as 3,437 cases on August 31. A total of 1,567 (or 45.59% of the confirmed cases) are active cases. These numbers are based on the daily CoVid-19 Monitoring of BALIKAS News, the data of which are gathered from all the city/municipal health offices, city/municipal epidemiology and surveillance units and rural health units of the 34 component towns and cities. The provincial office of the Department of Health (PDOHO) data reported by the Provincial Information Office only accounts 3,210 cases but with 1,751 (54.55%) active cases.