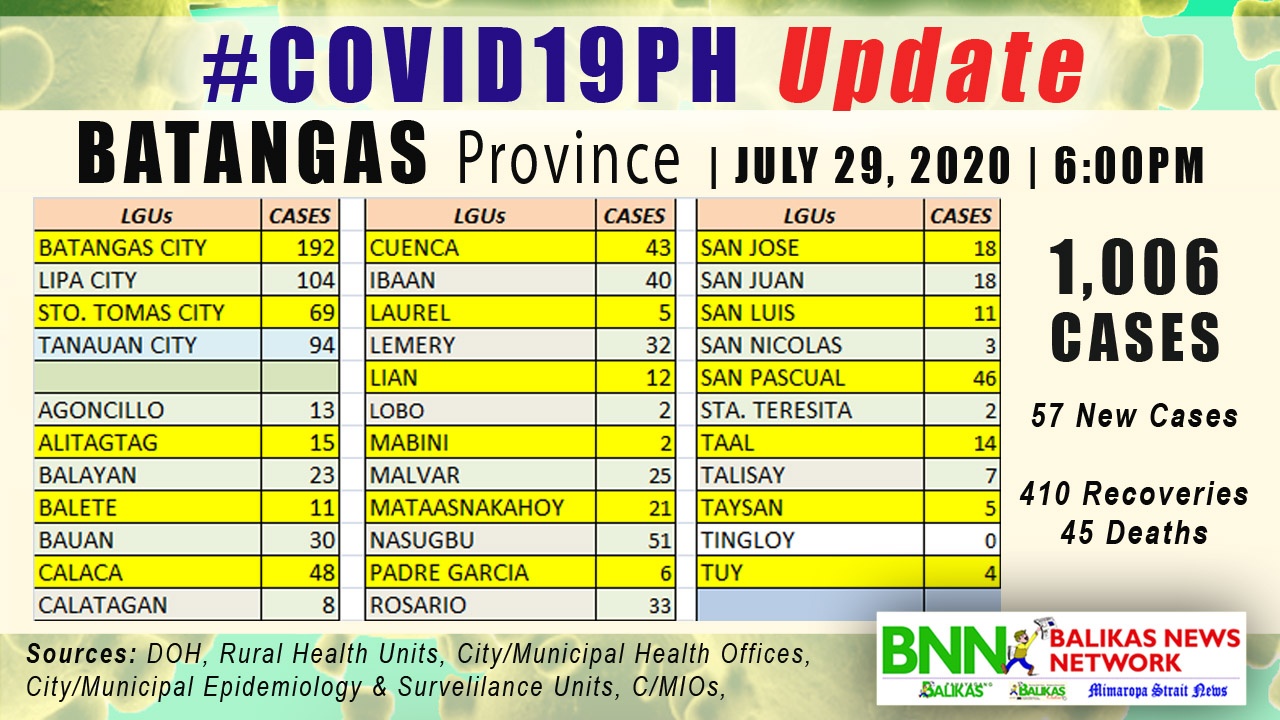 JUST a day left before the province of Batangas marks the 1st month of being placed under the modified general community quarantine (MGCQ) status, the accumulated confirmed positive cases of corona virus disease 2019 (CoVid-19) have now reach a 1,006 mark.

The figures reflected the data gathered from various sources that include the Batangas Provincial Office of the Center for Health Development (CHD) of the Department of Health – CALABARZON, the various local government units (LGUs) and their respective Rural Health Units (RHUs)  as of 6:00 o’clock p.m.  It is noticeable that the tally of confirmed cases mismatched with the Provincial Health Office (PHO)’s daily report that is released based on their cut-off at 3:00 o’clock [or sometimes at 4:00 p.m.] daily.

[Editor’s Note: With the delay in the confirmation of cases and the verification process of each LGUs, BALIKAS News Network maintains the monitoring to include cases reported as of 6:00 o’clock p.m. daily.]

It can be recalled that the Inter-Agency Task Force on Emerging Infectious Diseases (IATF-EID) places Batangas under MGCQ last July 1 and further extended it on July 16 to 31.

On the first 15 days of the MGCQ, Batangas provinces recorded 222 confirmed CoVid-19 cases, but on the next nine days [July 16-24], 282 cases were confirmed in the province, bring the total number of cases confirmed during the MGCQ to 504. As of 6:00 o’clock in the evening of July 24, Batangas’ confirmed cases have already reached a 835 mark. As of 4;00 o’clock in the afternoon of July 24, the Provincial Department of Health Office (PDOHO) in Batangas reported 432 active cases; 332 recoveries and 42 deaths in the province.

Various local government units (LGUs) attributed the surge in cases to the expanded targeted testing of frontliners in their localities and the delay of results in the preceding days at the Research Institute for Tropical Medical (RITM). Ibaan, however, clarified that most of their cases were considered as late cases because all of those 29 patients have their swab samples collected on July 9 and it took nine (9) days before the RITM was able to confirm them and took another three (3) days before the Municipal Health Office (MHO) received the confirmatory results and report it to the public.

In the case of Batangas City, of the 20 new cases reported on July 21, 13 of them are all barangay frontliners who whose samples were taken through the expanded targeted testing on the frontliners and other functionaries. However, there are 15 patients who have recovered in Batangas City alone on that day. As of July 29, Batangas City’s new cases include several frontliners, others with direct contact to previously reported cases and four (4) persons deprived of liberty (PDL).

As of this writing, Batangas City remains having the highest number at 192, followed by Lipa City at 104. The City of Tanauan City has 94 while the City of Sto. Tomas has 69.

Of the total 34 component cities and municipalities of Batangas, only the island municipality of Tingloy remains CoVid-19 Free.| – BALIKAS News Network