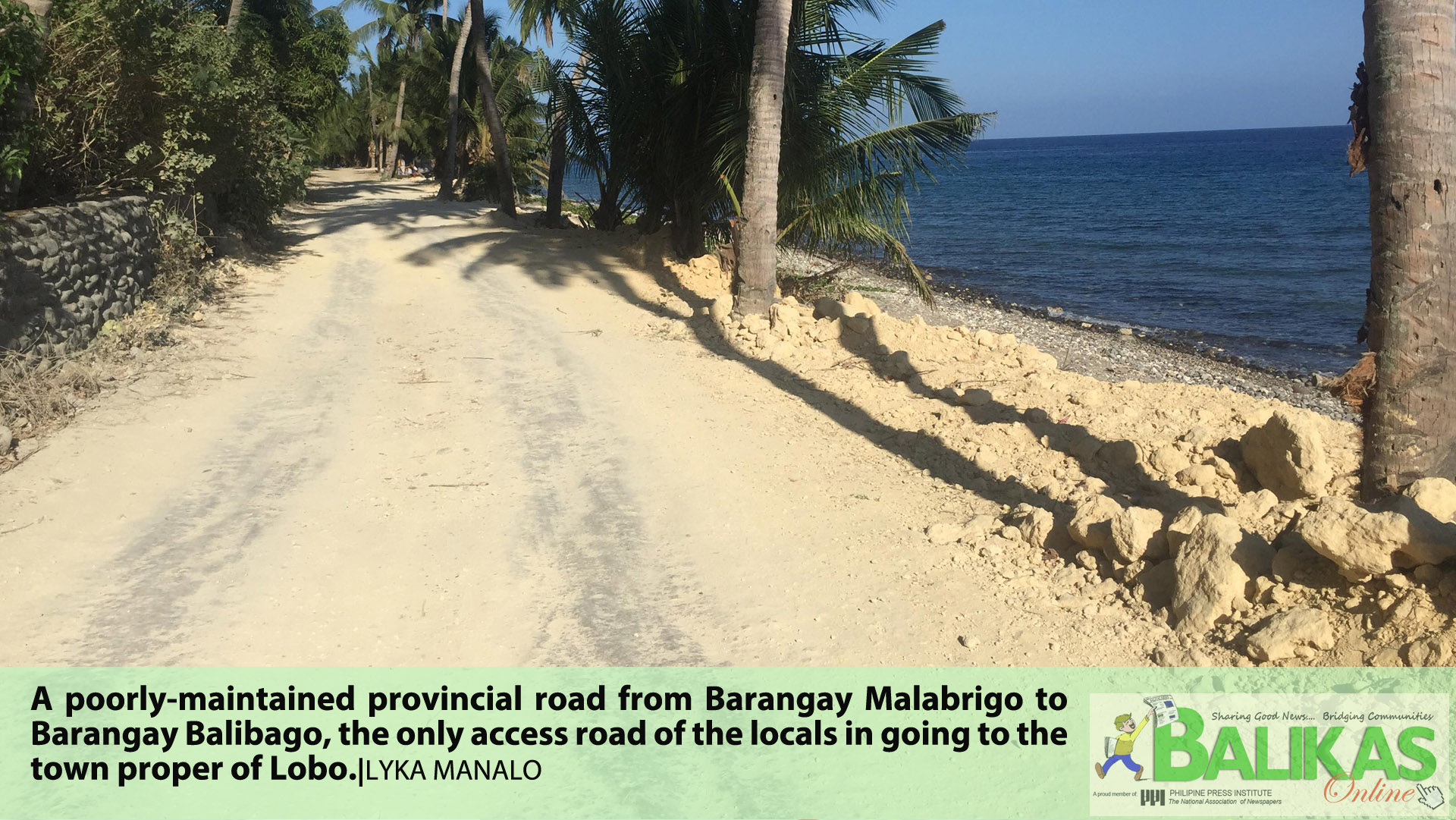 [THE following article is the Second Part of the Series. The series is the product of a 2-month research and study conducted under the Philippine Press Institute – Philippine-Extractive Industry Transparency Initiative (PPI-Ph-EITI) Media Fellowship on Digging Stories that Matter.]

THE crooked road to mining operation

AFTER more than 10 years of mining explorations, the proponents – Mindoro Resources Limited (MRL) Gold Philippines, Inc. and its partner Egerton Gold Philippines, Inc. — submitted its Declaration of Mining Project Feasibility (DMPF) on March 31, 2014 in its application for the proposed gold mining and processing project to MGB Region 4A.

The approval of DMPF along with other requirements is needed to proceed with the mining operations and gold processing in the area according to MGB Region 4A Samuel Paragas.

One of the requirements to approve the DMPF is an approved Environmental Compliance Certificate (ECC) issued by the Environmental Management Bureau (EMB) and it requires an endorsement from the local government unit (LGU) concerned.

Paragas said the ECC of the proposed mining in Lobo was disapproved because the local government had withdrawn its support to the project. Any two endorsements from the barangay, municipality and or provincial government are needed to obtain the ECC.

It can be recalled that the Sangguniang Bayan (SB) of Lobo cancelled a resolution barely three months after endorsing the mining project on April, 2015. Father Dakz Ramos said that at first, most of the people in Lobo had seen mining as an opportunity because they believed the mining operations will generate jobs, will uplift their living and bring huge development in their town.

As they continued talking with people concerned, residents eventually realized the environmental woes of the open pit mine method.

Estrella Magdamit, 52, has to walk about two hours which she says the fastest that she could going to the village proper from the mountainous area of Barangay Sawang where she lives going to her work as a farmer and caretaker of Mabisa Eco-Farm. 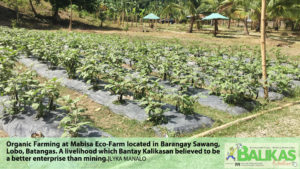 During the mining explorations, Magdamit used to work as cook for mining crews earning P250 per day, which she said was more than enough to spend in a day.
Her husband also worked at the exploration area as rock sifter while their two sons served as runners earning the same rate for several months.

Magdamit was hopeful that their source of living will become better once the mining operations commenced.

But when the group of AMEN informed her about the effects on mining to the environment, Magdamit eventually realized that mining could destroy the environment and she thought about the next generations.

With this awakening about the adverse impact of mining in the environment, Mag-damit joined her fellow residents staging protests in Lobo and even at the office of the Department of Environment and Natural Resources (DENR) in Quezon City which was organized by AMEN. She also signed a petition of no to mining in Lobo.

Nonie Armamento, 65, a resident in Barangay MabilognaBundok had figured an stable income when her house was rented by mining crews way back in 2009.
She said they were paid P15,000 a month for the house’ rent, food and laundry service.

For five years, her family served more than 10 crews including few Canadians and Australians whom Armamento tagged as ‘supervisors’ visiting the area for sometimes.

Aside from the monthly dues she received, her son was also hired by the company working as an ‘assistant’ earning P10,000 a month.

Every effort counts for local residents; from carrying steel pipes and equipments, to drilling, cutting and planting trees, or any labor works. They were paid P230 a day.

After several years, Armamento felt her neighbors envied for what she and her family had been benefited from the mining company.

His son was then hired in Dubai and later went to Canada where he is currently working.

Armamento said she witnessed some ‘works’ of the mining crews and had seen equipments and chemicals they were using during the mining explorations.

She added that they noticed that there was a change in the appearance of water in the creeks which usually used by the residents in cleaning backyard piggeries. As she can remember, more than four pigs which were taken care of her cousin died because of the chemicals carried in the creeks. Same incidents were also happened to her other neighbors, however, she remained quiet and never complained because she regretted the monthly dues that she received.

There were times the Batang Creek, the drinking water source for their cows, was almost drained.

She heard there were mining operations in Lobo since she was young but it was not a taboo as if nobody cares.

When the issue on the proposed mining arose, Armamento was the one who led other local residents encouraging neighborhoods to sign the petition on “no to mining”. She was the one who rented 17 jeepneys and helped AMEN in organizing the protest at the DENR office.

They go down to different barangays explaining the adverse impact of mining in the environment using a megaphone.

When the Lobo SB approved a resolution endorsing the proposed mining operations, the municipal government of Lobo was denounced by the Catholic church-led AMEN, environmental groups such as PNE-Kalikasan with the support of environmental advocate and former DENR Secretary-designate Gina Lopez, and local groups and individuals.

“They (MRL and Egerton) were asking for a resolution that they can actually use in support of their application for the ECC, siyempre pinag-aralan din namin yun, Lobo is a very sleepy town, a third class municipality, the income is so little, that time our annual budget is around P60 to 70M only then here comes the endorsement from the ten barangays with primary and secondary impact, pinag-aralan namin, ang papasok na pera sa Lobo is more than P800 thousand sa entire mining years hindi pa kasama ang corporate responsibility nila sa mga barangay” former councilor Rey Amparo said.

The Philippine Statistics Authority (PSA) Region 4A-Calabarzon (Cavite, Laguna, Batangas, Rizal and Quezon) reported that the economic growth in 2017 of the region had an increase of 6.7%, the highest growth in the past four years.

The share of industry to the region’s economy remained the highest driven by the faster growth in manufacturing with 86.5% shares and construction with 8% followed by electricity, gas and water supply with 5.2 %.

Mining and quarrying only shares 0.3 % in the economic growth in the region.
Thinking about the economic status in Lobo, Amparo and the local government considered the project as a big opportunity to generate jobs, and the municipality could provide better social services for the residents, gives free education, builds more school buildings, free hospitalization for indigents and there will be improvements on roads and other infrastructure projects.

Amparo who was the chairman of the Committee on Environmental Protection and Natural Resources sponsored a resolution endorsing the project.

The SB considered the support of 10 barangays with primary and secondary impact from mining operations including Balibago, Biga, MabilognaBundok, Malabrigo, Nagtaluntong, Nagtoctoc, Olo-olo, Sawang and Tayuman.

Amparo said based on the proposed project that was presented by Egerton, the project area was only 26 hectares which they thought was easy to rehabilitate after 10 years but later they discovered it was 300 hectares, one of the considerations why they backed out.

The resolution stated that the proposed Lobo Gold Mining Project was demonstrated to be economically feasible, environmentally sound and socially acceptable.

The SB decided to con-duct a public hearing that was attended by the MGB, the project proponent, local residents, barangay officials, No to Mining Movement, Lobo Preservation Coalition, and different sectors in Lobo.

“During that hearing, it was very emotional, there were a protest going on outside, it was the time Egerton admitted that 300 hectares ang project, hindi 26 lang tapos tinanong ko sila ano yung posisyon ng mining sa rehabilitation , we found out na wala pala sila pera para dun, they were scouting for investors for the project, mahirap yung ganun” Amparo narrated.

The resolution dated July 20, 2015 stated that the cancellation was approved in considerations to the petitions filed by Lobo Preservation Coalition represented by Ramos, one Danilo Perez and Lopez. It also noted that the gold mining project was found to be lacking in social acceptability.

“It was more of a change of heart, hindi puro numero, nag-usap-usap kami sa council and we have the same sentiments, we have consulted a lot of people because we are going to cancel a previous resolution, mabigat yun para sa amin, we talked to the Church, we asked teachers, the youth, the residents, then I asked guidance, I went to the priest, because we as the council has to make a decision to cancel it out. Because of the mounting protests and lots of petitions, we decided to cancel the resolution,” Amparo said.

“It is so stressful, we’re receiving lots of calls, hearing the people’s sentiments, the religious, barangay officials who were not in favor, then we asked their sentiments.., I had a change of heart about the whole thing,” he added.

On July 29, 2015, the Archdiocese of Lipa celebrated Pope’s Day at Lobo Plaza with about 5,000 attendees including a hundred priests who led the prayer rally, people from different places outside Lobo and local residents.

Father Dakz said the strive against mining in Lobo has not ended with the SB’s withdrawal of endorsement but an ordinance to totally ban mining will ‘kill’ the proposed project.

But the ordinance was disapproved by the SB council through nominal voting on its third and final reading. One member of the council was absent, three voted in favor and the rest of the majority disapproved the ordinance.

Amparo said though he stood to pursue the ordinance, some of the council members felt threatened when they had received letters from the mining company stating that the ordinance was unconstitutional.

Moreover, they were advised by the Department of Interior and Local Government (DILG) that they will be violating a provisions in accordance with the local government code.

The official concluded that the mining issue was one of the reasons he lost in his re-election bid. – To be continued –