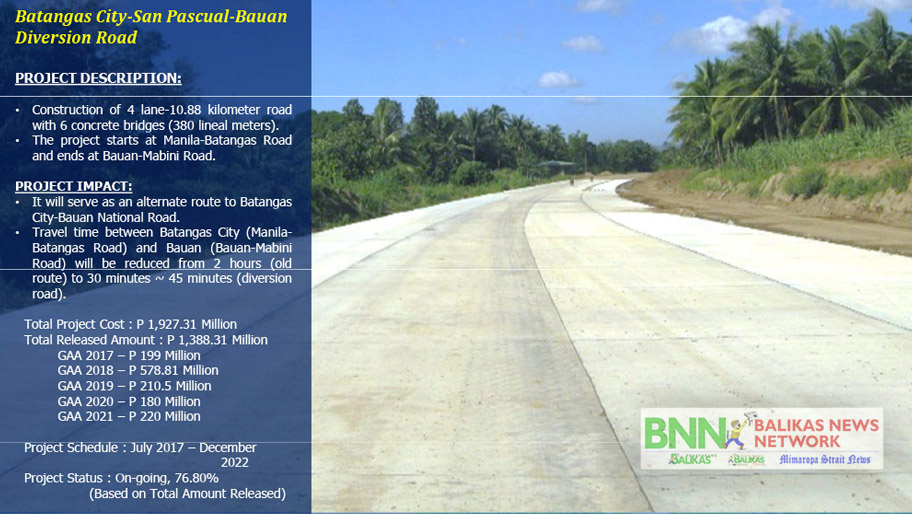 MOBILITY from Batangas City to Bauan and towards the first district of Batangas and vice versa, is relatively friendly now compared to the situation some few years back.

This development is the effect of the construction of the Batangas City-San Pascual-Bauan Diversion Road which traverses from Barangay Banaba South of Batangas City going west down to Barangay Manghinao in Bauan town.

“In the past, it has been the problem of both the commuting public and truckers transporting goods to and from this area, spending so many hours in the road causing so much delays in attending classes, in workplaces and in other transactions… but today, you can see the effect of building new road network,” former Deputy Speaker and Second District Congressman Raneo E. Abu told BALIKAS Nes in an interview over the weekend.

The diversion road is 76.80% complete based on the funds released by the national government to finance this project. It is a 4-lane road network of 10.88 kilometers with six (6) concrete bridges with a total of 380 linear meters.

Started in July 2017, this project is expected to be finished as scheduled by the end of December 2022.

The whole road network will have a total cost of 1,927.31 million. Up to December 2020, the national government has already alloted P1.168 B for this project.

With some portions that are still on its final phases, motorist from the west section (San Luis area) can past through the diversion road by turning left at Brgy. Manghinao in Bauan town and drive fast to Brgy. Bayanan area in San Pascual. They may also choose to turn right and exit down to Poblacion area towards the old highway, or move towards east to Balagtas (Batangas City) area and enter the Startollway towards Manila.| – BNN