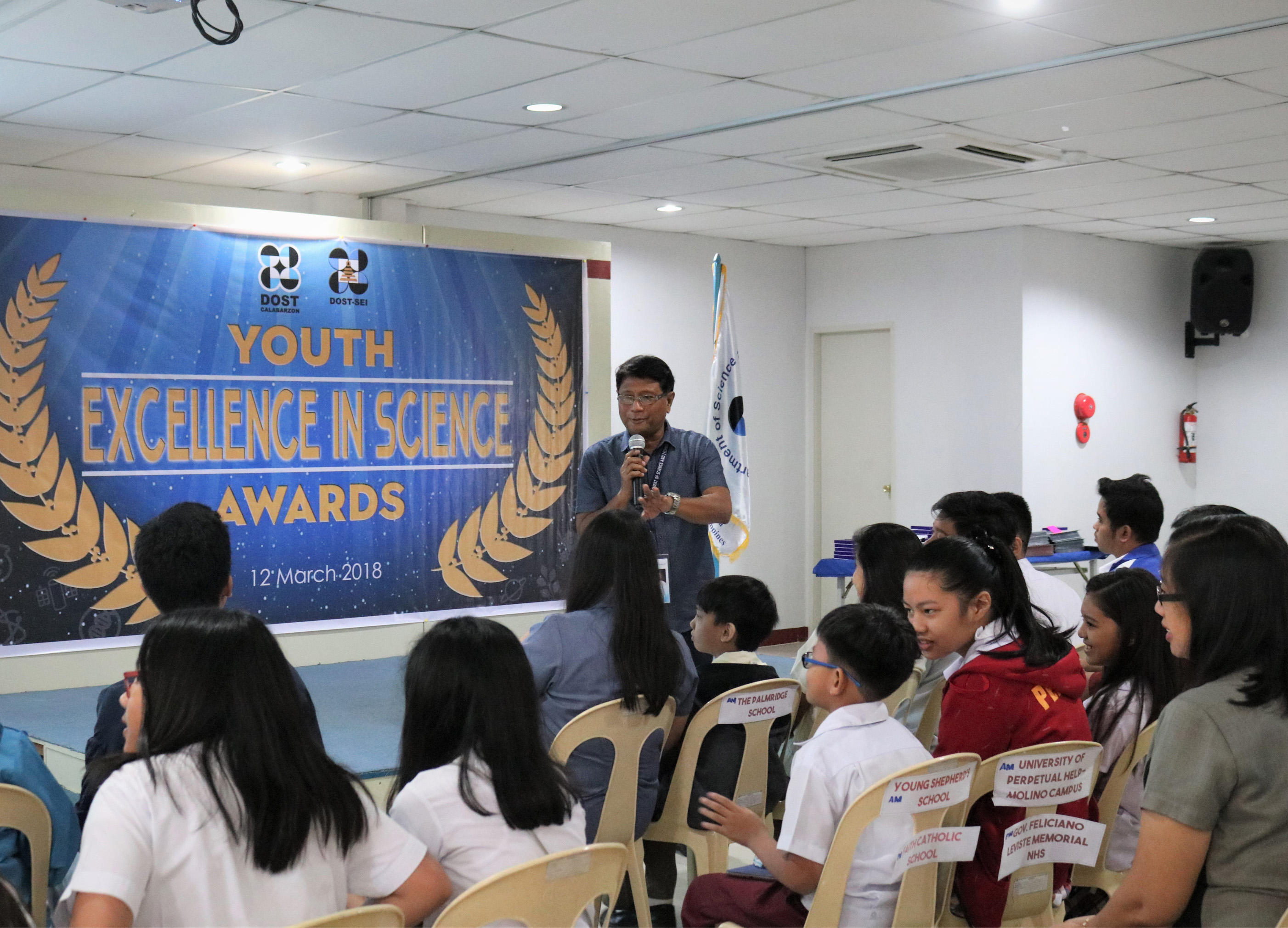 Dr. Alexander Madrigal, DOST-CALABARZON Regional Director, formally welcomed the students, parents, and school representatives. He first recognized the student awardees who were able to win internationally more than once and those who are from public schools. “You already have an edge to succeed, it is up to you how to use those edges,” Dr. Madrigal said in his message to the students. In addition, he encouraged the parents to continuously support their child and bring them to their dreams.

Moreover, Dr. Lydia Manguiat, Assistant Regional for Technical Operations, highlighted that the number of student awardees are increasing yearly. This is a good indication that the schools are supporting and harnessing their students’ talents. She also hoped that the students will be able to balance their academics with their social and moral values.

Part of the awarding ceremony is the sharing of thoughts and experiences from selected student awardees and parents.

John shared how hard work, motivation, willpower, and prayer became his formula to be able to win the international competitions he competed. For him, receiving YES award is easy but the process of getting the award is hard. He has to endure solving numerous math problems and reading lots of books as preparation for the competition. Moreover, nervousness filled him during the competitions. But these experiences led him to show that the Philippines is academically talented as he was featured in ABS-CBN’s The Filipino Channel (TFC) Wonder where he encouraged the kids to be not afraid of math.

Aiden doubted himself first but learned to lift everything to God. Joining competitions not only gave way to show his talent but also enabled him to experience different cultures and improve his self-confidence. He told how he first got a bronze medal in his first contest until how he managed to bag a gold medal at his succeeding competitions. He believed that it is not luck or what they call as “tsamba” but God’s work.

Mr. Jong Dizon, John’s father, narrated how his son calls him from time to time due to uneasiness in the training camp. He shared how important for the parents to show support to their children starting from their training up until the day of the competition. He also mentioned his proudness as a father to become privileged of having a son who competes for the country.

Ms. MyenBercilla, Aiden’s mother, also shared her experiences as a parent. Working as soldiers, she told that their salary is only enough for their daily expenses. She also recalled how they went through asking for solicitations, cash loans, and donations just to send Aiden to international competitions. As a parent, she felt guilty of not being able to support his son physically. So with the help of her co-parents, they raised money in order for Ms. Myen to join Aiden to another country. Watching his son compete makes her nervous and restless as many thoughts keep running in her mind. But these turned into excitement and tears of joy every time his son was announced as a winner. All their expenses and hard work really paid off as she sees her son enjoying competing and winning in the competitions. She ended her speech saying, “Angperanahahanapyan, peroangpagkakataonhindisalahatbinibigay.”

Championing in the field of science and mathematics

Medals and certificates were awarded to 18 Cavite schools, 17 Laguna schools, 18 Batangas schools, 1 Rizal school, and 2 Quezon schools. The following schools are as follows:

One way of boosting the students’ competence is through the conduct of YES Awards. As years pass by, it can be observed that there is an increasing trend of student awardees from CALABARZON. Awardees from the previous years are as follows: 114 students were awarded in 2017, 71 students in 2016, and 47 students in 2015.

Ms. EmelitaBagsit, Supervising SRS and OIC-ARD for FAS, closed the program encouraging the students to serve our country first. She also mentioned about applying for DOST scholarships if they wanted to pursue science, technology, and mathematics.

The YES Awards is a DOST institutional award for exemplary achievement of the youth in the fields of science and mathematics. The Secretary’s Medal is conferred to winners of international science and mathematics competitions that have been duly recognized by Science Education Institute (DOST-SEI).|#BALIKAS_News